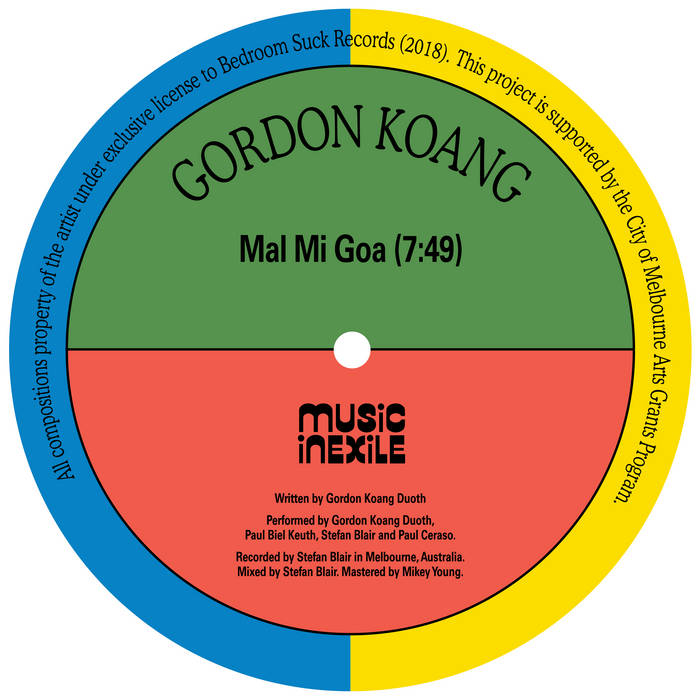 Gordon Koang Duoth is a Neur speaker and musician hailing from the Upper Nile region of what is now South Sudan. Accompanied by his cousin Paul Biel, Gordon performs a blend of traditional Neur rhythms and original compositions in English, Arabic, and his native language, Neur.

Having recently arrived in Australia seeking refuge from a country torn by civil war, Gordon and Paul are attempting to raise funds and awareness to help their family emigrate and settle safely in Australia. Musicians of a world-class standard, Gordon and Paul have previously toured throughout Europe and North America, performing to sell-out crowds. They are currently waiting approval of permanent residency in Australia, which will allow them to once again travel and perform around the world.

‘Mal Mi Goa’, Gordon’s first release for the Music in Exile project, is a song sung in his native Neur language, calling for peace between the people of Sudan and also around the world. It was recorded by Stefan Blair in a cramped attic studio in Collingwood in the cold Melbourne winter of 2018, where Gordon and his cousin Paul would come for weekly jam sessions punctuated by conversation and shared meals. It was during these sessions that many local Melbourne musicians had the opportunity to meet Gordon, dropping by for a chat and marvelling at his incredible skill on the thom, a kind of Sudanese banjo that has been in Gordon’s family since his days back in Sudan.

The track is backed on the B-side by another one of Gordon’s peace songs, this time sung in Arabic and titled ‘Salaam’, literally, peace. As a speaker of English, Neur and Arabic, Gordon’s songs can often be found in various forms and multiple languages, yet they will often revolve around central themes of peace, love and harmony amongst the people of the world. He is an incredibly passionate and gentle man, always moments away from one of his trademark smiles. To hear Gordon speak of the human race and his dreams for peace is truly an inspiring and uplifting experience.